The project to reconstitute the historic fleet, which the Club owned at the end of the 1940s, is underway. In addition to the three historic models of the Club in recent decades, the Club has two varieties of the Cessna “Birddog”.

The goal, already partially achieved, is to have aircraft of high historical value and recognized worldwide importance, perfectly restored and available for unique flight experiences for Club Members and qualified visitors. Let’s have a look at them, starting with the only one that was not present in the fleet of the forties:

The Cessna 305 (C305C) is a military aircraft that belonged to the armed forces of the United States and then to the Light Aviation of the Army of our country. Such is its fame for war uses that it is normally referred to by its military name: L-19. An aircraft considered an “antique”, it offers the pleasure of a cabin typical of the 1940s, unusually spacious, with exuberant power, as well as exceptional visibility, a key characteristic of an aircraft designed as an “observer”. High performance is ensured by the O-470 engine that delivers 213 HP at 2,600 rpm..The floats, as produced  by the manufacturer (like those of skis), are the EDO 248-2440.

The plane can be used by all Club members. 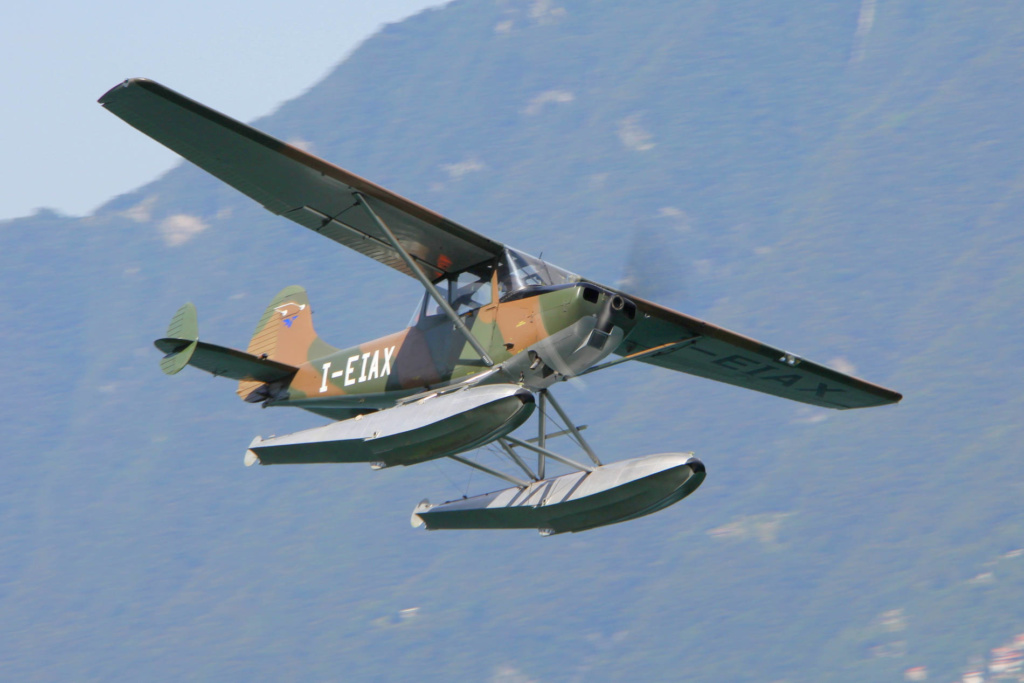 In January 2013, the Club acquired a Republic RC-3 Seabee, an amphibian with a four-seater hull, as part of the reconstitution of the historic fleet.

The aircraft, found in excellent condition in Washington State, USA, has the Simulflight conversion, with a 270 HP engine. The Club team took care of the disassembly, containerization and shipment of the machine, which arrived in Como a few months later. It will be completely overhauled.

It is an amphibious hull aircraft with a two-wheeled trolley, engine equipped with gearbox and reversible pitch propeller. Together these words describe both the ease and difficulty associated with this machine. It should be noted that, although of a very “modern” conception, the Seabees are all between 66 and 67 years old, with all 1,060 units having been built from mid-1946 to mid-1947.

Owned by the Aero Club Como since the very early post-war period, this aircraft came off the flight line in the early seventies, but then underwent a thorough restoration, still in progress at time of writing. The original engine is a Continental C-85 or C-90, but the Aero Club Como obtained certification in the 1960s with a Rolls Royce O-200 engine, which delivers 100 HP (the same as the Cessna 150).

The floats, made of wood, were designed in 1946 by the team that had studied those of the Macchi-Castoldi MC-72 hydro cycle which beat and still holds the speed record. The plane is light but also solid thanks to its wooden construction, which makes it possible to adopt a cantilevered wing. The cabin is very well designed, with the doors hinged at the top and the flap control on the ceiling.

The plane is undergoing restoration.

This plane, frequently known as “Caproncino”, is not owned by the Club, but by member Gerolamo Gavazzi, who restored it. It is housed in the hangar and is a source of pride for all Como aviation lovers, both because it is the original type of aircraft of the local flight school, which has owned up to 14 specimens, and because it is the oldest seaplane in the world in its original configuration and which is in perfect flying condition.

The owner is pleased to list his aircraft among those of the “Historic Aero Club Como fleet“.