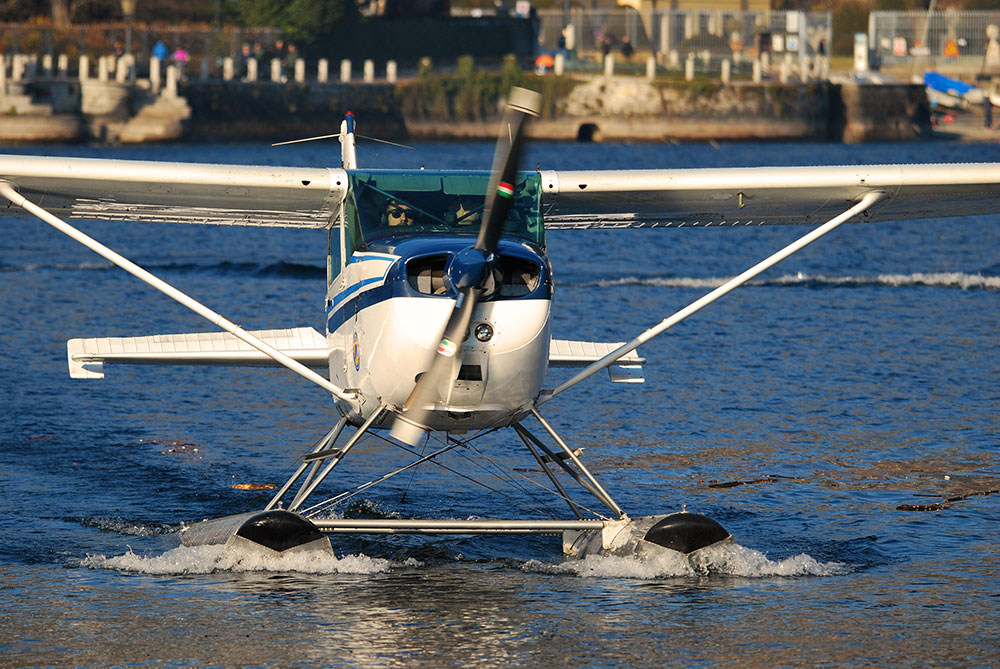 The single-engine Cessna 172 (C172) forms the backbone of the Aero Club Como fleet. An ideal trainer, this aircraft, as well as being solid and very reliable, is also easy to use and economical for private flights. If you enrol in our Flight School or take an introductory flight you will sail immediately with this excellent seaplane. The engine is made up of the 4-cylinder Lycoming O-320 engine, of the D2J type, which deliver 160 HP at 2,700 rpm. The hydro floats are the EDO 2130, slightly longer – and therefore more reliable – than those originally designed for the model.

The Cessna 172 amphibian – Brand I-GDHR – equipped with a 180 HP O-360 engine and Wipaire 2350 floats, completes the fleet of 5 Cessna seaplanes, one of which will be equipped with amphibious floats.

The Cessna 206 (U206G) is the largest single piston engine from Cessna. The engine installed is the Continental IO-550, which delivers over 300 HP at 2,700 rpm, bigger than the original IO-520. The plane is equipped with a double set of floats; the hydro ones are the PK 3500, the amphibians the Wipline 3730. The model owned by the Club is equipped with two STOL kits (short takeoff and landing), which ensure much slower detachment and contact speeds than the original model, resulting in reduced stress on the structures and greater safety of operations. Propeller and muffler were chosen specifically to reduce the noise output, as well as the engine, which delivers power equal to or greater than that of the original engine, but at 150 rpm less, with a significant reduction in noise.

The Piper PA 18 (PA18-150) is a high performance two-seater, also used for mountain flying for its strong STOL (short take-off and landing) characteristics. The engine is the Lycoming O-360 which delivers 180 HP at 2700 rpm. The floats are Wipline 2100 amphibians.